Since 1983, Citrus County Abuse Shelter Association, Inc. (CASA) has been helping victims of domestic violence and their children to become free of abusive relationships and violent homes. Intimate partner violence (IPV) commonly referred to as domestic violence is not uncommon and both women and men are victimized sexually, physically, and psychologically. Domestic violence has many negative outcomes for survivors including mental and emotional distress and health concerns including serious physical injury. 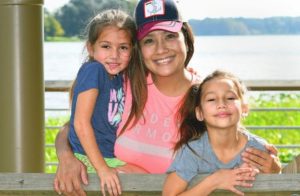 Domestic violence is happening each and every day. It is happening to your friends, family members and co-workers who might be trying their hardest to hide the horrors they endure day in and day out. Christy, is just one mother who successfully got her life back with CASA’s care and support after living a nightmare of abuse. Christy’s longtime boyfriend and father of her two young children picked her up from work and accused her of infidelity. He began to drive erratically while Christy begged him to just take her home. He answered her fearful request with a fist. Christy, had suffered a severe injury to her face and this was not the first time. “He threatened to kill us both,” Christy said. “He said he could make it look like an accident.” Christy attempted to flee the car for her life when he slammed on the brakes and began head butting Christy. Because of the severity of her injuries, she was taken to a trauma center in Brandon.  He was eventually located by police and arrested. When she came home from the hospital, Christy thought, “It’s over. I can heal, and my kids and I can move on with our lives.” Instead, sheriff’s deputies and an investigator from the Department of Children and Families (DCF) were waiting for her at her house. The kids went to live with a nearby relative. Christy came to CASA for help and support.  Advocates at CASA worked with Christy to help her rebuild her strength and educate her about intimate partner violence. Christy attended support groups and classes at CASA which were an integral part of her healing. Christy was able to recover and emerge from the violence with renewed strength and independence. Today, Christy has been reunited with her children and says, “I want to be a voice, an advocate for others,” she said. “Abuse is so prevalent — one in three women. I fell hard, but I also had great people who helped me.”

CASA has worked tirelessly for over 37 years to help victims and survivors of domestic violence just like Christy by providing shelter, safety, intervention, and education, and to educate the community for social change. CASA assists over 1,200 individuals per year to escape domestic violence and provides violence prevention education to over 2,000 youth and community members per year.

Please visit the website to learn more and to donate.