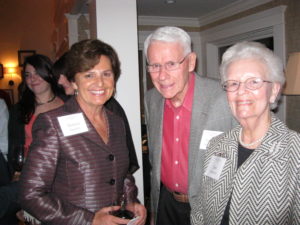 The Community Foundation of Tampa Bay lost one if its most dedicated advocates last month. Jim Strenski, 91, passed away peacefully on July 7, 2021 in Clearwater. Jim was a loving husband, devoted father and grandfather, successful entrepreneur and generous philanthropist. His Catholic faith and commitment to helping others were unwavering.

“Jim and Jane Strenski were welcoming advocates of the Foundation when I arrived in 2012. I learned I could depend on Jim for candid, wise leadership and marketing advice. He loved God, family, and community and committed wholeheartedly to all of them. He believed deeply that our community would only thrive when joined together philanthropically, ‘Together We Are Doing Good for Great Causes.’ We will miss him.” – Marlene Spalten, President and CEO 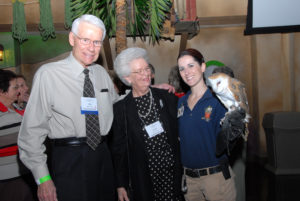 Jim graduated from Marquette University in 1952 with a BA in Journalism. At Marquette, he met Jane Wambach and the two were were married May 15, 1954. They were married 64 years and had five children.

In 1962, Jim founded Public Communications, Inc. (PCI) in Chicago and later added offices in Tampa and Miami. He was deeply committed to public service. Besides serving on the board of the Community Foundation and as the long-standing chair of the Foundation’s marketing committee, Jim served on the board of The Florida Orchestra, and was chairman of the board 2004-2005. He was a member of the Outback Bowl Board of Directors and chairman of the public relations committee for many years. He was a board member of Concerned Citizens of Clearwater; a trustee and passionate fundraiser for Academy Prep Center of Tampa; and a member of the Bequest Society of Jesuit High School. He was also a member of the President’s Society Honor Roll for annual donations to Marquette University. In the 1960s, he supported open housing policies and founded HOPE (Homes of Private Enterprise) to provide housing for under resourced families living in the Chicago area.

In addition to his five children, Jim is survived by 12 grandchildren. Jim was preceded in death by his wife, Jane.

We use cookies on our website to give you the most relevant experience by remembering your preferences and repeat visits. By clicking “Accept All”, you consent to the use of ALL the cookies. However, you may visit "Cookie Settings" to provide a controlled consent.
Cookie SettingsAccept All
Manage consent

This website uses cookies to improve your experience while you navigate through the website. Out of these, the cookies that are categorized as necessary are stored on your browser as they are essential for the working of basic functionalities of the website. We also use third-party cookies that help us analyze and understand how you use this website. These cookies will be stored in your browser only with your consent. You also have the option to opt-out of these cookies. But opting out of some of these cookies may affect your browsing experience.
Necessary Always Enabled
Necessary cookies are absolutely essential for the website to function properly. These cookies ensure basic functionalities and security features of the website, anonymously.
Functional
Functional cookies help to perform certain functionalities like sharing the content of the website on social media platforms, collect feedbacks, and other third-party features.
Performance
Performance cookies are used to understand and analyze the key performance indexes of the website which helps in delivering a better user experience for the visitors.
Analytics
Analytical cookies are used to understand how visitors interact with the website. These cookies help provide information on metrics the number of visitors, bounce rate, traffic source, etc.
Advertisement
Advertisement cookies are used to provide visitors with relevant ads and marketing campaigns. These cookies track visitors across websites and collect information to provide customized ads.
Others
Other uncategorized cookies are those that are being analyzed and have not been classified into a category as yet.
SAVE & ACCEPT
Skip to content