Get Started
Back to All 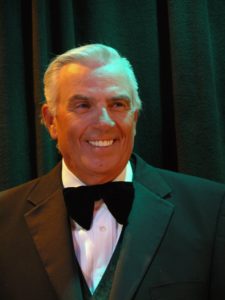 Lew Resseguie, a professional New York actor for over 30 years retired to Sun City Center Florida and was one of the founders of the Performing Arts Club of Sun City Center, its first president as well as a writer, director and singer/actor in PAC shows for over 10 years.  From their first musical revue, “The Great American Songbook” in 2004 until their final musical, “The Poor Old Soles Club” in 2015 the PAC was busy entertaining residents of Tampa’s SouthShore.

Lew made theater his mission, because theater is a teller of great truths. Musical theater, the core of Lew’s existence, is especially gifted at revealing to us what is noble and evil, what is civil and cool; because it can advance serious thoughts with pants-falling down humor and through one lyric line from one song prompt us to reflect on events and moments that define us, each one of us, as a person, and all of us as a people. And, when a community needs a lift, when there’s need for celebration, it’s the singers and the dancers and the comics who are called upon to do their thing. We are, all of us, proof of this. We humans dance before we learn to walk, laugh before we understand the language, and sing before we learn to speak. Theater is our history set to music.

The mission of the Performing Arts Club is to Entertain, Enrich and Educate. Through the magic of live theater that is exactly what they did. The Performing Arts Club of Sun City Center, formed in 2003, staged full seasons of theatrical productions, conducted educational activities in acting, voice, dance and other theater skills, gave scholarships to students interested in the theater arts, performed numerous benefit concerts, transformed The Rollins Theater into a first-class theatrical venue and had among its goals the construction locally, of a state-of-the art theater.

In 2006, when the Sun City Center Community Association delayed indefinitely its plans to reconstruct the Rollins Theater, the PAC volunteered to take on a renovation project. Grants, donations and ticket sales financed improvements. A performing arts center was never built but the dream lives on.

The PAC held theater seminars in local high schools and colleges, performed at Fun Fest, and at other South Shore events, helped design a new sound system for Lennard High School, participated in County Library programs, and developed a corps of elementary school singers and dancers called the PACKids whose appearances included holiday concerts at area retirement homes, King’s Point Chorus concerts, The Follies, the opening ceremony of the new South Shore Library, The Seafood Festival, and performances for various clubs and organizations in the area.

The Performing Arts Club of Sun City Center and Lew Resseguie accomplished their mission of entertaining, enriching and educating actors and audiences for many years.  When Lew passed away a field of interest endowment was established in his name with the Community Foundation of Tampa Bay to honor his work and his achievements in theater arts. Through this endowment the Performing Arts Club of SCC has come full circle and Lew Resseguie’s legacy will continue to live on as annual distributions are shared with theater arts organizations in Hillsborough County in perpetuity.