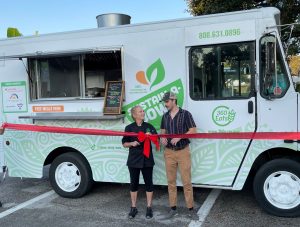 The Community Foundation Tampa Bay often makes early investments in nonprofits that are taking a creative or nontraditional approach to addressing a community need. That was the case for 360 Eats, a nonprofit launched in 2020 to reduce and to divert food waste and turn it into healthy meals for people facing food insecurity.

The idea was sparked as founder Cameron Macleish traveled the globe and was introduced to the concept of “dumpster diving” by travel companions in Australia. He learned that grocery stores are routinely required to throw out food that has expired, but he found it was still fresh, healthy and free of mold or bacteria.

Returning home, Cameron talked with the grocery store managers to see how he could re-route what would become food waste to people who he knew were hungry and in need of a healthy meal. He discovered that grocery stores could only donate to nonprofits, so he started to explore the idea of starting a nonprofit.

As Cameron explored the idea, he talked with his mother Ellen Macleish who was professionally trained in culinary arts and worked at the Epicurean Hotel in Tampa and Hotel Fenway in Dunedin. She suggested the idea of turning the donated food into a completely different meal – one that’s healthy and tastes delicious, similar to meals that you’d expect to find in local restaurants.

For Cameron and Ellen, it was important to bring these meals to people who need them most.

Our community’s health and vibrancy depends on consistent access to food that supports an active, healthy life. One in eight (12.2 percent) Pinellas County residents are defined as food insecure, according to a 2020 survey. Those who are chronically food insecure face threats to their health from chronic disease like diabetes, increased heart disease, and kidney issues. In addition, their opportunities decrease for employment and educational successes.

To address food insecurity, they created the 360 Eats’ network of professional chefs and volunteers who work together to give surplus food new life. Initially, they’d prepare and package the meals, then work with nonprofits, neighborhood centers and other organizations to distribute the meals.

As the nonprofit began to take shape, Cameron and Ellen sought experts who could help the organization grow.

Cameron and Ellen were introduced to Social Venture Partners Tampa Bay, a collective of successful professionals who share their time, expertise and resources to develop strong nonprofits. The mother-son team where soon encouraged to apply for SVP Tampa Bay’s Fast Pitch program.

Fast Pitch is a structured 16-week program that teaches nonprofit leaders about operations, marketing, finance, law, and the art of storytelling. The 16-week program culminates in a “Shark Tank”-style pitch night where each nonprofit has a chance to share a 3-minute pitch detailing the mission of their organization and the social enterprise that helps fund their programs.

360 Eats was accepted into the 2021 Fast Pitch cohort, and paired with Geoff Anderson, Vice President of Strategic and Corporate Development at WellDyne, as a mentor.

The Fast Pitch program came at a key time. 360 Eats had partnerships with food donation centers, meal recipient locations, and processes to prepare and deliver the food in place. The 360 Eats system had already created 14,000 high-quality meals from 58,801 pounds of recycled food, but it was looking at ways to feed even more people.

At the time, 360 Eats was relying on its volunteers’ vehicles to pick up and deliver meals to local shelters and community centers. Reliable transportation was limiting the nonprofit’s ability to expand.

Cameron and Ellen began to think about ways to bring meals to people, and to expand the number of people who receive meals. They saw the popularity of food trucks, and they knew it could be a way to serve more people. They used the Fast Pitch program to create a business plan for a food truck, and crafted and honed a pitch to share on stage.

Securing funding for a new idea

“It was the first time that we had received a substantial amount of money to help fund this food truck idea,” said Cameron Mcleish.

Just as important, it provided an opportunity for 360 Eats to be introduced to Community Foundation Tampa Bay, which is the presenting sponsor for Fast Pitch and serves as fundholder for SVP Tampa Bay.

360 Eats’ food truck would quadruple the nonprofit’s ability to serve healthy meals to north Pinellas County residents. It would visit neighborhoods to reach families with limited reliable transportation, unpredictable work schedules, and no means to prepare meals themselves.

The Community Foundation awarded a $40,000 grant to 360 Eats to provide seed funding for a mobile food truck. The initial funding provided credibility to 360 Eats, who then approached Florida Blue Foundation, Fairlife and Santander Consumer USA Foundation for additional funding.

“With the Community Foundation’s funding, we had the credibility to approach other organizations for support,” said Ellen Mcleish. “We were able to multiply the grant.”

360 Eats’ “Sustain-A-Bowl” food truck currently serves meals on a weekly basis at local community family and homeless centers. Currently, the truck is serving meals in Oldsmar and Clearwater, with more sites regularly added to the schedule. There are no eligibility requirements, making it as easy as possible for hungry people to get access to fresh, nutritious food.