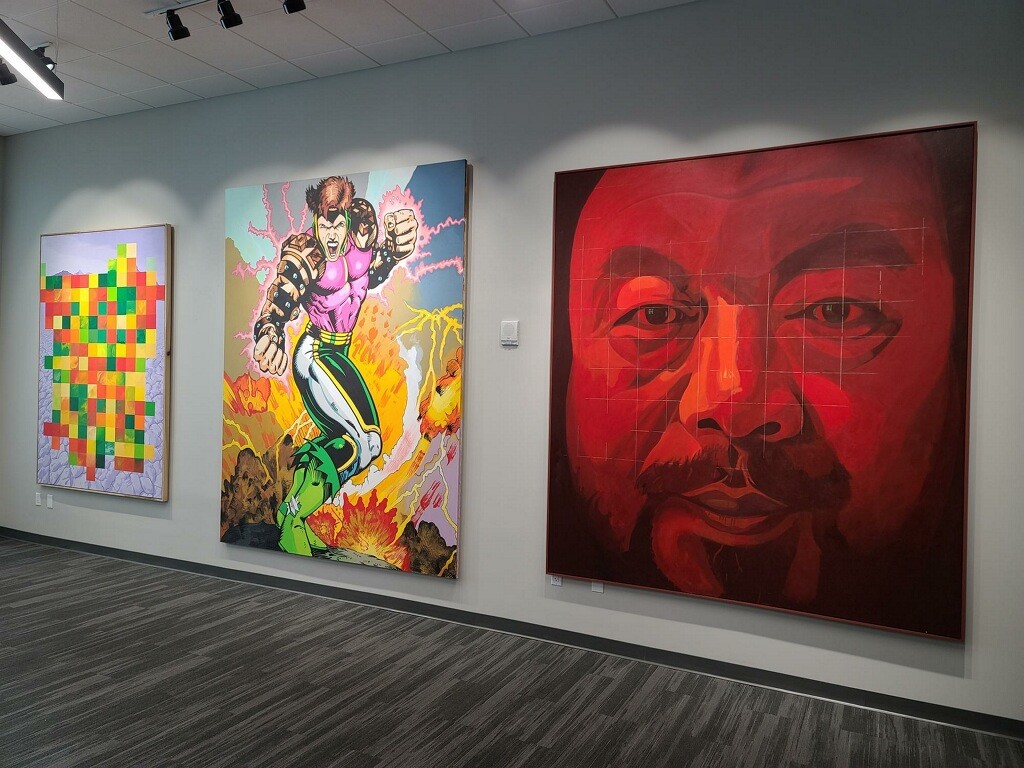 Works by Theo Wujcik, from the personal collection of Stanton Storer

Both Stanton and the Community Foundation of Tampa Bay are so very proud to exhibit these four special paintings by local artist legend, Theo Wujcik.

This remembrance essay was written by Stanton Storer in honor of his friend and inspiration.

I first met Theo at an art benefit auction in 1999, where I acquired my first painting by this artist, Barking Dogs Signaled The End Of The 20th Century, 1999 (not included in this exhibition). Since then, I have amassed a collection of approximately 30 works by this one artist.

The morning after the auction, Theo shared with me that, “There are two people extremely important in the art world — of course, the artist who creates the work, but more importantly, the collector who not only supports the artist through acquisitions, but one who shares their collection with others to view.”

Those words have always resonated with me and is the impetus behind why you are able to enjoy these works here today at the Community Foundation.

About Theo Wujcik
As an introduction to Theo Wujcik, Margaret Miller, Director, Institute for Research in Art, University of South Florida, wrote an essay on the artist for his 30-Year Retrospective: 1970- 2000, held at the then-Gulf Coast Museum of Art. This exhibition was co- curated by Margaret Miller and the late artist, James Rosenquist.

Following are a few excerpts from Miller’s essay:

“Long an influential presence in the Tampa Bay area, Wujcik has produced a diverse and continually evolving body of workover the last thirty years. He embraces modes of production and the freedom of experimentation similar to other artists of his generation such as Robert Rauschenberg, Jim Dine, Roy Lichtenstein and James Rosenquist. His images are culled from popular culture, art history, free associations, reverie and deliberate responses to events and the complexities of our time.

Wujcik is attentive to contemporary art practice as it has evolved from a relatively small network of private galleries in the major cities of the world in the ‘60s into the current global phenomena that reaches well beyond. He may be making art in what is regarded by some as the provinces, but the work is anything but provincial. Greater exposure in New York or Los Angeles interests him but is not a driving ambition. What does matter to him, is that friends and colleagues, like James Rosenquist, visit his studio and are enthusiastic about the work. In fact, he is represented in important museum collections throughout the United States and in numerous private collections in the Tampa Bay area. He has not taken refuge in Florida but relishes the privilege of working in a supportive environment where he generously contributes as a studio faculty at the University of South Florida and serves as a model for emerging artists.

Wujcik’s early mark on the art world was achieved with his elegant and meticulous portraits of artists and art world figures. The artist, as subject, addressed his evolving interest in the collaborative process, which he first observed as an apprentice printer at Tamarind.” In a 1996 talk at Eckerd College, he said, ‘I became impressed with the collaborative process, the idea of more than one person engaged in producing a work of art.’ ”
Source: Essay by Margaret Miller, THEO WUJCIK 30-Year Retrospective, Gulf Coast Museum of Art, Largo, FL exhibition catalogue, 2000.